Mondoweiss has published a copy of a pamphlet (see below) being handed out by Orthodox Judaic 'youths' in Jerusalem protesting Pope Francis' visit. Contrary to the hasbara framing of the content and distributors of the pamphlet as "extremist" it is in fact a true representation of the tyranny and ugliness of the religion of Orthodox Judaism as anyone taking the time to source the uncensored texts of Maimonides, the codifier of Orthodox Judaism cited in the pamphlet, will see for themselves.

There is much to be observed in the details surrounding these "extremist" Orthodox Judaic 'youths.' First, we have seen reports that the Israeli Police and intelligence know who they are and who their leaders are but have done absolutely nothing about it until now that the Pope is soon to arrive on a damage control mission for them. There are even reports that many of them have been detained until the Pope leaves. Then, naturally, the Orthodox Judaic 'price tag' terrorism will resume.

The pamphlet makes reference to the 7 'Noahide laws' which Orthodox Judaism intends to impose on all non-Judaic people. We know that the Novus Ordo popes are aware of this two-tiered tyranny of Orthodox Judaism because their commission for religious relations with 'the Jews' officially recognized the 'Noahide laws' in 2007 as we documented HERE.

Moreover, Pope "Saint" John Paul II cited the teaching of Maimonides contained in the final paragraph of the pamphlet which addresses the messianic age (according to the rabbis), as we documented in 2007 HERE.

The pamphlet also frankly admits that Orthodox Judaism takes full responsibility for the execution of Christ as we've documented HERE.

We can also see that, as I've said earlier, the so-called "extremist" price tag terrorists are in fact moderates because they're commanded to, among other things, destroy Christian 'idolatrous' altars. So quite truthfully, spray painting some blasphemies and slashing tires is mild in comparison to what is coming when these 'youths' are further emboldened to follow the teachings of their religion, Orthodox Judaism.

And lastly, we see these followers of Orthodox Judaism employing the Orthodox Judaic acronym "Yeshu" meaning: 'may the name and memory of Jesus be wiped out.' We documented that Pope Francis' favorite painting contains this very same blasphemous attack against Jesus Christ HERE.

So, as we can see, contrary to the framing of these followers of Orthodox Judaism as anti-Pope extremists, they and the Novus Ordo Popes are very much on the same anti-Christ page. 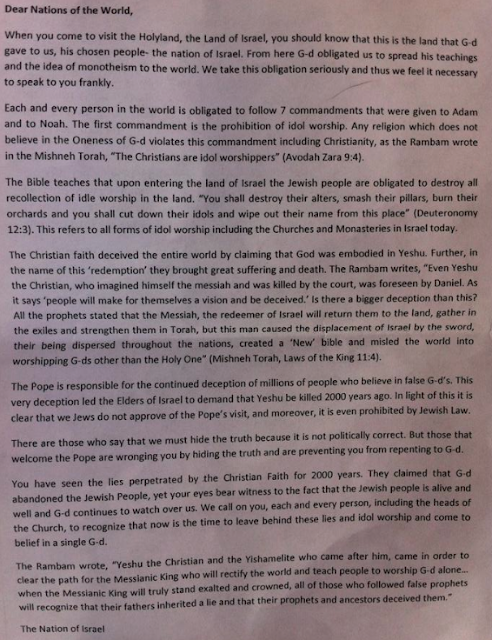