Establishment gatekeepers, including the Judeo-supremacist anti-Zionist wing, will not permit a propaganda victory for the Palestinian people unless it is deferential to the establishment benchmark; Judaic suffering ('like the Warsaw ghetto').

The people of the Gaza ghetto, ignored once again, can't eat, shelter themselves or save their souls with your 'balance,' Pope Francis.

Your enabling of the oppressor is anti-Christ in the extreme. You are no vicar of Jesus Christ. Even your post-postmodern humanist posturing is a sham.

True merciful souls who thirst for true justice will not settle for crumb-throwing gestures toward the oppressed as 'balance' to lavish, comforting acts of aid benefitting the powerful. And balancing aid between the weak and powerful is not something to be sought by a Christ figure to begin with. The needy are in need, not the privileged. But these materially privileged, powerful 'Jews' are in need of the Gospel which you coldly deny them.

The weak and oppressed need the jackboot of 'unique' Judaic suffering removed from their neck before there can be any talk of justice. No one who leaves the 'suffering' Judeo-supremacist jackboot on the neck of the oppressed as they offer a hand should be taken seriously. Enough 'Holocaust' primacy.

Why Does Pope Francis Promote the Hasidic Painting, "The White Crucifixion"? 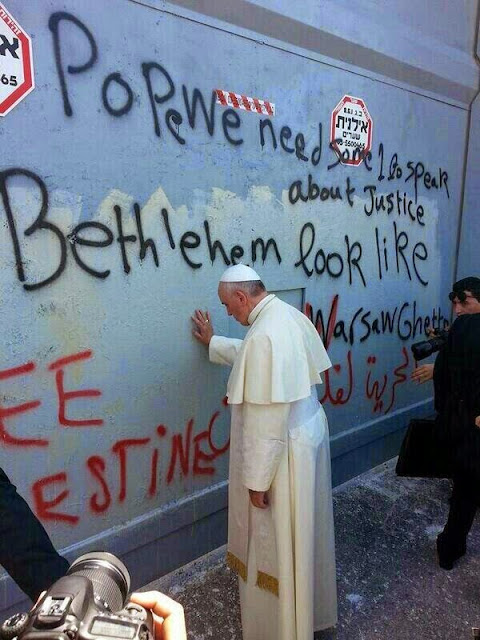 And just look at this TRADITIO headline!!!

Israeli Prime Minister Corrects Francis-Bergoglio on an Historical Point
Netanyahu Knows More about Christian History than the Newpope!
From: The TRADITIO Fathers

Thank you "Maurice" for your cogent & insightful writing. The 'church' has become a neutered and frightening spectacle. The masses have been struck dumb.

Bergoglio hid the Papal Cross when he met the rebbis. View the pictures here: