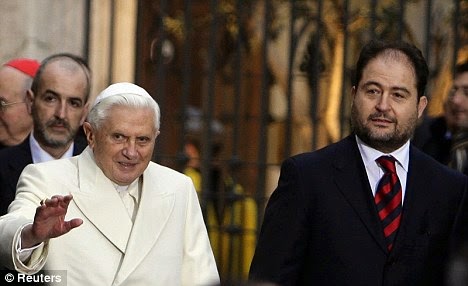 Novus Ordo Pope Benedict XVI at the entrance to the Synagogue of Rome in 2010 with the Judaic thug, Riccardo Pacifici. We wrote on this event HERE.

Riccardo Pacifici, a close friend of Pope Benedict XVI and Pope Francis, invited Israeli commandos for a feast in Italy in 2010 after they attacked a flotilla of aid workers destined for Gaza. Riccardo Pacifici called them "heroes" HERE.

Riccardo Pacifici himself led a violent assault on pro-Palestinian demonstrators in Rome this week:

Attacks on demonstrators in Rome

… At this year’s annual April 25 march commemorating the liberation of Italy from Nazi-Fascism, Palestinians and Palestine solidarity activists gathered near the Colosseum to participate, as they have every year, bringing the voice of Palestine to this celebration of resistance against oppression. As they began to raise Palestinian flags, a group of roughly 40 members of the Jewish Community, led by the president Riccardo Pacifici, present with Israeli flags and those of the Jewish Brigade, also an annual occurrence, stormed and began physically attacking the activists. This time the police did intervene, though late and facing the victims of the aggression rather than the aggressors, allowing the attacks to continue! …


Despite a prior agreement with ANPI, the Italian Partisans Association, organizers of the march, for the participation of Palestine solidarity activists, ANPI, shamefully, chose to concede to the demands of the pro-Israel fanatics, who refused to allow the march to begin with Palestinian flags present. Police prevented the Palestinian solidarity activists from joining the march as it departed, though a large number of supporters stayed on and eventually marched together with the activists ...

Miryam Marino of the Italian Network of Jews Against the Occupation observed that “the immeasurable Zionist violence that continues to move forward with its plan of genocide in Gaza, after killing over a dozen in the West Bank in recent weeks, is extending its reach to here in Rome, as thugs led by the President of the Rome Jewish Community, Riccardo Pacifici, who is nothing more than a mouthpiece for the criminals Netanyahu and Lieberman, target protesters who peacefully express their solidarity with the Palestinians under bombs.”

Pope Francis also has a "very warm and affectionate" relationship with the violent thug Riccardo Pacifici and both are involved with the 'Noahide' 'Sant'Egidio' organization:

Francis recalled the story of the Pacifici family, saved by the nuns during the Nazi persecution, says the president of the Jewish Community of Rome Riccardo Pacifici. "While I was leaving, the Pope called me back from the door and told me that he remembered the story that I had told him on my last visit last October", said Pacifici, namely, that his grandmother and his father, Emanuele Pacifici, former president of the Jewish Community of Rome, had taken refuge with the nuns in Tuscany, thus escaping the Nazis. Pacifici spoke of a "very warm and affectionate" meeting with Pope Francis, to which he presented the representatives of the Jewish community. Then he stressed the "great friendship" with the [Noahide] community of Sant'Egidio [see HERE, HERE, HERE, HERE] founded on "strong shared values [HERE]"

The Pope assured that he will pray for the three Israeli boys kidnapped in the West Bank. “The Pope will visit the synagogue in Rome” says Pacifici, at the end of a meeting with the pontiff in Sant'Egidio, in which the delegation of the Jewish community presented the pope with a formal letter of invitation.

Posted by Maurice Pinay at 3:47 PM

The only minority in the world who are in fact its majority!
The poor Christians in the Middle East and the Palestinians are the biggest sufferers. Everything is so connived that this minority is in fact the majority.

bergoglio, Has spoken of his "concern" for eastern Christians, ancient Christians. But to my knowledge he has not once publicly spoken for Christians in Palestine or Jerusalem specifically, Catholic or Orthodox. And he only makes an occasional plea and call for prayer for peace. He will never point a finger at the guilty or even insinuate them as the guilty. That makes him more guilty and his Holocausted Church.

Homosexuality in excelsis - that for Rome ia all that matters?

WHAT VIOLENT REACTION WILL PACIFICI HAVE TO THIS?:


Hundreds of Italians have signed an online petition slamming Israel's actions in the Gaza Strip as a “slow genocide” of the Palestinians and demanding a “Nuremberg trial” for Israel over the “destruction” of Palestine.

The petition was signed by 525 Italians, mainly academics, Haaretz reported. The signees say they are dismayed by the events in Gaza and accuse Israel of pursuing colonial policies and “ethnic cleansing” of the Palestinians.

The document calls for Israel to face an international tribunal, a Nuremberg-like trial, for its war crimes and the “slow genocide” of the Palestinian people. Italian activists believe that not only the Israeli military and the government, but also the entire state of Israel and “its accomplices” should be brought to trial over current events, as well as those in the past and “the foreseeable future.”

The online document also blames the US for supporting Israel, and the EU for “active or passive complicity” in Israel's actions against the Palestinian people. The petition signees also accuse the United Nations of its failure to stop Israel. The Western media, according to activists, paints the events in the wrong light, justifying the Israeli offensive in Gaza as a self-defense operation.

Called 'Noi Accusiamo' (We Accuse), the petition was initially published on an academic website, Historia Magistra, but has gone viral after being re-posted on the website of left-wing newspaper Il Manifesto.

However, the paper’s co-editor-in-chief, Tommaso Di Francesco, told Haaretz that Il Manifesto had “nothing to do” with the document and that it appeared on their website thanks to a blogger. He added that the petition did not appear in the printed version of the newspaper since he believes the Nazi comparison to be “repulsive and historically incorrect.” The series of trials known as the Nuremberg Trials were held by the Allied Forces after WWII to bring Nazi criminals to justice.

The document has already triggered strong reactions for drawing a parallel between Israel and Nazi Germany and for suggesting that an entire nation should face trial.

According to Haaretz, the petition was drafted by Angelo d’Orsi, a professor of history at the University of Turin and a contributor to a number of left-wing publications.

The author of the document said he was perfectly aware that the “Nazi analogy is a strained comparison.” D’Orsi said he referred to Nuremberg “to shock the Italian Jewish community,” which in his words is “a mouthpiece for the Israeli government.”

The publication comes amid growing international criticism over Israel's operation in the Gaza Strip. The four-week offensive has already claimed over 1,800 Palestinian lives – most of whom were civilians, according to rights groups.


On Tuesday, Palestinian Foreign Minister Riad al-Malki said that Israel must be prosecuted at The Hague for war crimes it committed during the conflict in the Gaza Strip.

Meanwhile, Bill van Esweld of Human Rights Watch also told RT that the Israeli military must be held criminally accountable for the operation.

There has been a surge in anti-Israel – as well as anti-Semitic – sentiments in Europe, with synagogues and Jewish venues attacked and Jewish nationals receiving death threats.

In Italy, for instance, signs bearing anti-Semitic slogans have surfaced across the country, with more than 70 posters and inscriptions with hate speech and swastikas appearing in the capital of Rome. Those included slogans such as: “Jews, your end is near”; “Dirty Jews”; “Anna Frank was a liar” and “Let’s burn synagogues,” according to Haaretz.

The situation has prompted Jewish communities across the EU to step up security, while almost one-third of Jews are mulling emigration, according to a study by the European Union’s Fundamental Rights Agency.