"Those who do not keep [the 'Noahide Laws'] have no right to exist in this world" (Chabad Rabbi Boaz Kelly's 'Noahide' evangelism tract, see below) 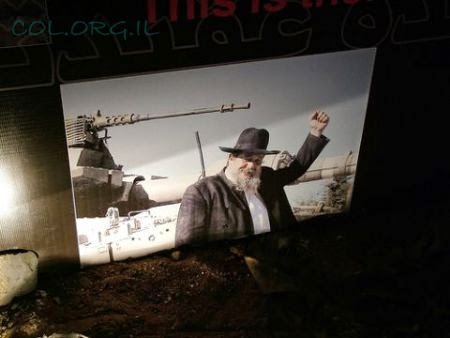 Druze Israeli Likud politician Ayoob Kara is a fanatical evangelist of the 'Noahide Laws' of master race Judaism in Palestine while simultaneously ingratiating himself with the 'New Right' in Europe, ostensibly as an opponent of religious fundamentalism. 'Noahide' Ayoob Kara's superior rabbis teach that the 'Noahide Laws' are the mandatory fundamental belief system for all non-Judaic people and must be accepted under penalty of execution in the 'messianic age' which Chabad has determined to be the present time.

The following tract was addressed to the people of Gaza as it lay smoldering in ruins following the savage IDF invasion and arial assault of 2014. 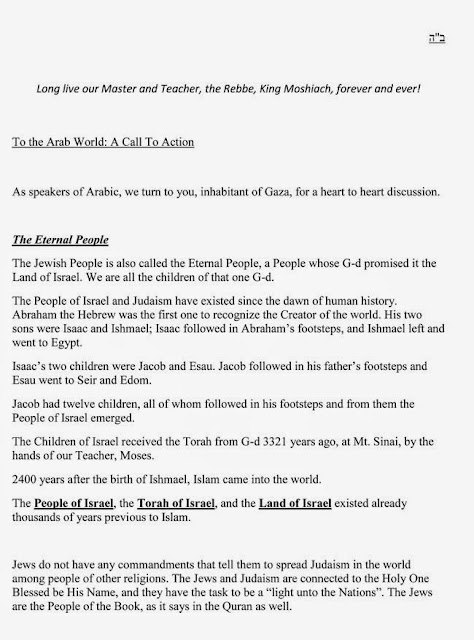 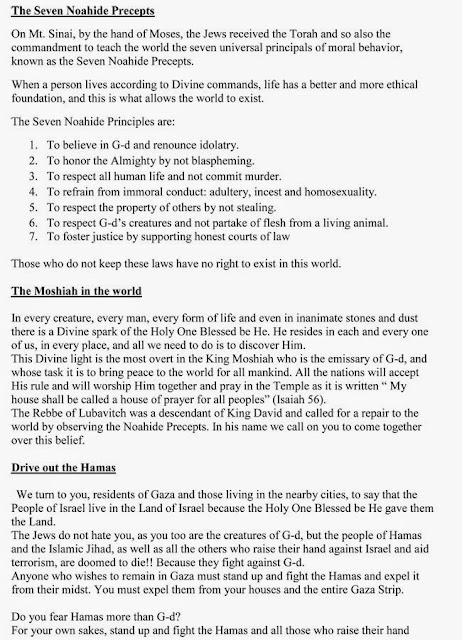 The irony for so-called Christian evangelicals is that the first of the supposed Nohaide Laws prohibits Christianity as a form of idolatry.

It may be worth noting that the persecution of Yezidis in Iraq has received abundantly more attention than that of Christians in Iraq, Syria, and Palestine.

I suspect that this is another symbolic gesture of the Talmudists of their contempt for Christianity and of their devotion to the synagogue of satan.

Catholic forums ignore such issues and concentrate on Freemasonry. World Zionism controls Freemasonry, the global media, and the Papacy. Chabad Lubavitch is just one of it's Hydra Heads.

OT Pope Francis has said that he expects to die soon and might retire. Waht happens then ? Do they call bak Benedict or will we have three popes once more?http://www.dailymail.co.uk/news/article-2728759/I-2-3-years-left-live-Pope-Francis-speaks-time-death.html

JMR - the man is a fraud in more ways than one. Why did he accept the Papacy living on just one lung?
He was not exactly a young man when he became "pope" - in fact he was past 75 yrs old, the current retirement age for Novus Ordo clerics.

World Zionism controls Freemasonry, the global media, and the Papacy. Chabad Lubavitch is just one of it's Hydra Heads.

Chabad and many other Hasidic sects were building synagogues in Palestine over 100 years before there was a "World Zionism."

Zionism is the most destructive, unproductive, welfare dependant movement in history. Without a foundational fanatical ideology to sustain it (Judaism) and massive amounts of economic warfare-generated income streams (usury, drug trade, weapons trade, resource strip mining, theft, fraud, etc.) Zionism wouldn't accomplish anything. Zionism is controlled by its foundational ideology (Judaism) and its income stream, just like every other movement is. Let's not apply particularist 'logic' to the matter as Judaism would have us do.

In the flyer, in the section under “Drive Out Hamas”--

“The Jews do not hate you, as you too are the creatures of G-d.”

Goyim are, yes indeed, “creatures" in the eyes of Chabad-Lubavitch, beings with lesser souls, not fully human.

A cockroach is stil a creature of God but we step on it. God allowed kelippot to be generated but they should still be annihilated, according to Chabad.

Orthodox Judaism whether Chabad or non-Chabad, teaches that Arabs are Amalek, even though God, in the Old Testament, said that Amalek is no more.

When these rabbis tell the slaughtered people of Gaza “we do not hate you” they are lying, as usual.

Rabbinic Judaism represents deceit in every conceivable facet of its nature.

Thank you for this insight Michael.

Although, in the same context the tract says, "Those who don't keep [the 'Noahide laws'] have no right to exist in this world"; in other words they're saying, We 'love' you, but if you don't believe and do exactly what we say, we'll kill you. That, very truthfully is the 'love' the rabbis have for non-Judaic humanity. Can we get a psychiatrist's diagnosis of this psychopathology?

This is a very honest statement of intent from the rabbis. It's "Jewish Universalism" exactly as it's intended to be in the 'Messianic age' according to the codifier of rabbinic Judaism, Moses Maimonides, i.e. convert to the Noahide Laws or die. And as we also see from the flyer, they're saying that this is, according to them, the 'Messianic age.'

It's also nearly unknown that Rabbi Shneur Zalman and Menachem Mendel of Vitebsk launched a Zionist movement in 1777:

First Chassidic Aliya (1777)
The first Chassidic aliyah ("ascent" - immigration to the Holy Land), led by Rabbi Menachem Mendel of Vitebsk, Rabbi Abraham of Kalisk and Rabbi Yisroel of Polotzk, reached the Holy Land on Elul 5 of the year 5537 from creation (1777 CE). They were all disciples of the 2nd leader of the Chassidic movement, Rabbi DovBer, the "Maggid of Mezeritch" (who had passed away five years earlier) and colleagues of Rabbi Schneur Zalman of Liadi, founder of Chabad. Initially, Rabbi Schneur Zalman was part of the group; but when the caravan reached the city of Moholiev on the Dnester River, Rabbi Menachem Mendel -- whom Rabbi Schneur Zalman regarded as his teacher and mentor after the Maggid's passing -- instructed him to remain behind to serve as the leader of the Chassidic community in White Russia and Lithuania. Rabbi Schneur Zalman retained close ties with the settlers in the Land of Israel and labored to raise funds for their support.

These are a few things the gatekeepers and discourse-shapers Weiss, 'seafoid' and 'Mooser,' those great 'progressive' apologists for rabbinic Judaism, want to make certain that people remain ignorant of.

Didn't know you had covered Adnan Oktar (aka Harun Yahya) already. He sent gifts to Francis at the Vatican through some rebbe buddy of his who also happens to be a Sanhedrin members and also wanting to build the 3rd Temple. Started a post on this but we never finished it. Will have to soon.