The occult science dealing with numbers is based in the conceit typified by the words of the 15th century Kabbalist, Pico della Mirandola "By number a way is had to the searching out and understanding of everything able to be known." Numbers and numerical symbols are believed by occultists to have power and events are obsessively planned to correspond with dates, times, measurements and locations believed to be efficacious to, and symbolic of ritualistic intent.

Why was 7-7-07 chosen by Benedict XVI as the date for the release of a Motu Proprio related to the traditional Latin Mass? I know of no great significance of the date July 7th to the Catholic tradition, much less the number 777. The number 777 seems to reflect the spirit of the counterfeit Gnostic Mass of neoTemplar, Aleister Crowley more than the Spirit of the Latin Mass canonized by St. Pius V. The number 777 has great significance in the Western Occult tradition.

"... the compiler of Liber 777 was a great Qabalist when he thus entitled his book ... he had an academic reason for his choice of a number; for the tabulation of the book is from Kether to Malkuth, the course of the Flaming Sword; and if this sword be drawn upon the Tree of Life, the numeration of the Paths over which it passes (taking [Gimel], 3, as the non-existent path from Binah to Chesed, since it connects Macroprosopus and Microprosopus), is 777." (777, Aleister Crowley) 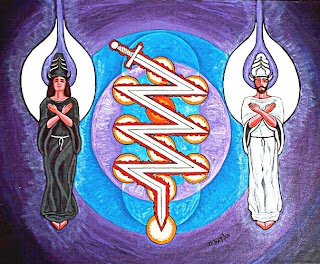 777, the "flaming sword," is the Kabbalistic path representing the descent of the Shekinah or Matronit (also represented by the downward triangle of the occult hexagram or "Star of David").

"The flaming sword which turned every way to keep the way of the tree of life" (Gen. III, 23). Now, what is "the way of the Tree of Life"? This is the great Matrona who is the way to the great and mighty Tree of Life. Concerning this it is written: "Behold the bed which is Solomon's; the three score valiant men are about it, of the valiant of Israel" (S.S. III, 7), namely, the Supernal Israel. "They all hold swords" (Ibid. 8), and when the Matrona moves they all move with her, as it is written: "and the angel of God, which went before the camp of Israel, removed and went behind them" (Ex. XIV, 19). Is, then, the Shekinah called "the angel of the Lord"? Assuredly! (Soncino Zohar, Shemoth, Section 2, Page 50b - 52a)

Also note that this 7-7-07 date falls on Saturday, the seventh day of the week, the Judaic Sabbath. The Shekinah is the "Queen of the Sabbath" or "Sabbath Bride:"

A special atmosphere of solemn celebration surrounded the Sabbath, which was thoroughly pervaded with kabbalistic ideas about man's role in the unification of the upper worlds. Under the symbolic aspect of "the marriage of King and Queen," the Sabbath was enriched by a wealth of new customs that originated in Safed, such as the singing of the mystical hymn Lekhah Dodi and the recital of the Song of Songs and Chapter 31 of Proverbs ("A woman of valor who can find?"), all of which were intended as meditations on the Shekhinah in her aspect as God's mystical bride. Mystical and demonic motifs became particularly interwined in the area of sexual life, to which an entire literature was devoted ...

the most important [Kabbalistic] symbols are the Keneset Yisrael ("the community of Israel") and the Shekhinah ("the Divine Presence"). The Kingdom of Heaven, which is realized in time in the historical Keneset Yisrael, represents therefore the latter's meta-historical aspect as well. The supernal Keneset Yisrael is the mother (matrona), the bride, and also the daughter of the "king," and they appear in countless midrashic parables on the relationship between God and the Jewish people. In her capacity as bride (kallah) she is also, by a mystical etymology, "the consummation of all" (kelulah mi ha-kol). She is the receptive aspect of "the holy union" of "king" and "queen."(Encyclopedia Judaica, "Kabbalah")

Those who are aware of this mystery of the union of the Holy One with the Shekinah on Sabbath night consider, therefore, this time the most appropriate one for their own marital union.’ SEE FOR THAT THE LORD HATH GIVEN YOU THE SABBATH. What is the meaning of the word "Sabbath"? The day in which all the other days rest, the day which comprises the other days, and from which they derive blessing. R. Jose said: ‘The Community of Israel is also called "Sabbath", for she is God's spouse. That is why the Sabbath is called "Bride", and it is written, "Ye shall keep the Sabbath, for it is holy unto you" (Ex. XXXI, 13): it is holy to you, but not to other nations; "it is a sign between me and the children of Israel" (Ibid. v, 17): it is Israel's eternal heritage.’ (Soncino Zohar, Shemoth, Section 2, Page 63b)

Also see, On the Mystical Shape of the Godhead: Basic Concepts in the Kabbalah, and On the Kabbalah and It's Symbolism, and Major Trends in Jewish Mysticism by Gershom Scholem.

"So he drove out the man; and he dwelt at the east of the Garden of Eden between the Cherubims, as a Shekinah (a fire-tongue, or fire-sword) to keep open the way to the tree of life." (The Jamieson, Fausset, and Brown Commentary)

Witness the Kabbalistic theme laden "Christian" Zionist 777 celebrations and their suggestion that this is "a kairos moment in time:"

"Christian" Zionists on 7-7-07 begin "the preparation process for the fulfillment of the promise." Note the Noahide rainbow:


Information on 777 author, Aleister Crowley's development of his Kabbalistic counterfeit mass ritual can be found at the following link, but I warn that it is blasphemous and sexually perverted:


7-7-07 has also shaped up to be a boon for the wedding racket. Fertility rite perhaps?

Also relevant is the gambler aspect of the cryptocracy:

Those familiar with Michael A. Hoffman's thesis regarding the 21 gateway and Arthur C. Clarke's revelations regarding the 2001 change of era time may see some significance in the date chosen for the Vatican's liturgical gamble.

And, there are, of course, 7 Noahide Laws which the Vatican recently conjured up a fictitious New Testament basis for:

All throughout the world, the "goyim" are being mesmerized by numbers and cajoled into enslavement.
Posted by Maurice Pinay at 10:12 AM

I really know nothing of/and have
little interest in the Kaballah...it seems to me to be an almost Hindu cosmology...
but from traditional Christian in-
terpretations of Biblical numbers that I have come across,
the number 7 is usually represented
as God's number of completion or
perfection, the number 6 is the number of a man, and the number 8 is the number of Jesus Christ, the
number of the New Creation & the
number of infinity...the occultists
use these numbers from/for another
perspective/purpose.