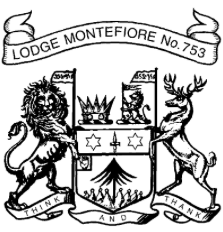 We're going to start focusing more on the nexus of the "poor" Hasidic 'Jews,' the mega wealth behind them and the Zionist movement that both are, respectively, ideologically and financially responsible for. You're not going to get these essential facts from 'progressive' anti-Zionists.

… Perched above the ancient Roman market street known as the Cardo [in Jerusalem], [Chabad-Lubavitch’s Tzemach-Tzedek Synagogue], also serving now as a kollel, was the only one found intact following the Six-Day-War. It was here that Rabbi Moshe Tzvi Segal, a dynamic and fearless Chasidic personality, led the first minyan in the Old City following the war.

Rabbi Segal led a movement to repopulate the city [with 'Jews'], and moved into Beit Menachem, otherwise referred to as the Tzemach Tzedek's shul …

The beginnings of this structure date back to 1847, when after 15 years of difficulties with their Arab neighbors in Hebron, a number of Chabad families moved to Jerusalem and began building their community. The third Lubavitcher Rebbe, Rabbi Menachem Mendel of Lubavitch (1789-1865), also known as the Tzemach Tzedek (after the title of his voluminous responsa), encouraged them to build a synagogue. Lacking funds, they reached out to Jewish philanthropists from abroad.

In an 1849 letter to England’s Sir Moses Montefiore, the group wrote, “We have no proper place for prayer and worship, to study Torah. We lack holy books and a proper place to keep them… We have no where to turn, no one to lean on other than the kindness of Hashem, our Father in heaven.”

With [usury and opium trade] funds from Montefiore, Elias David Sassoon in Bombay, [Sir Albert Sassoon], and others, the group purchased land for the synagogue in 1850. Finished six years later, the shul was named “Beit Menachem,” in honor of the Rebbe who promoted its founding … 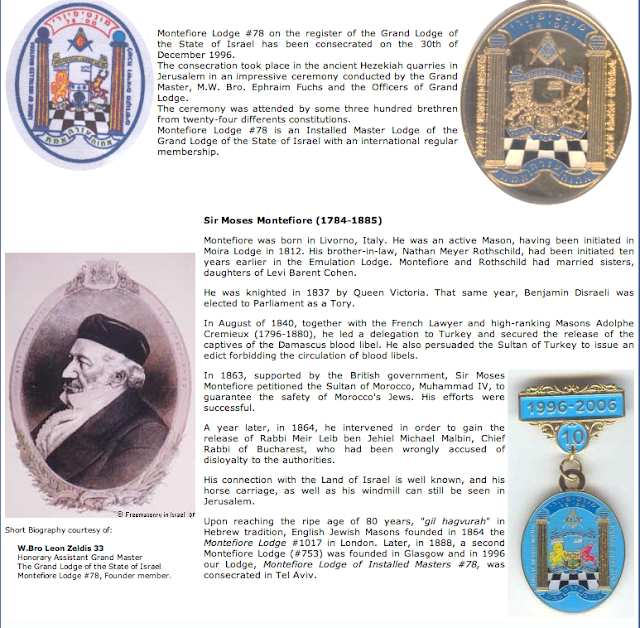 B'nai B'rith set up shop at the Shanghai nexus of the Sassoon opium racket. Naturally, the "psychosis of anti-semitism" would have reared its head there: 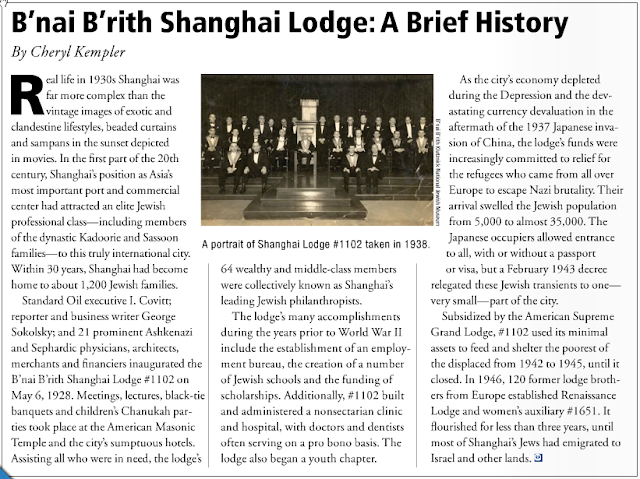 Joseph Lieberman 'jokes' about Chabad being a more extensive intelligence network than the CIA
Posted by Maurice Pinay at 1:23 PM

Morris last line is on the Chabad.

"Thus, for example, in 1890, a Bedouin tribe who cultivated the lands that would later be Rehovot, wrote: "Lately, the supreme government has sold the place to certain people of the land. We did not protest since the new owners of the land clearly knew that the place was cultivated and handled by us for many centuries… but, still in this condition, the land was suddenly sold to a group of foreign Jews [Asralin] who arrived with funds… They began to expel us from the land we lived on… the farm, which was ours since the times of our fathers and grandfathers, was forcefully taken from us by the strangers who do not wish to treat us according to the accepted norms among tillers of the soil, and according to basic human norms or compassion. In short, they will not accept us, even as their slaves."

"The philosophical aspect of Hasidism, from the point of view of the theoretical Kabbalah, is developed... in...the Tanya. The disciples of this philosophy call themselves Chabad...This sect is widely scattered among the Jews...The great good which will result from a combination of Hasidism with the national movement (secular Zionists) is almost incalculable...there are only two alternatives for the great Jewish masses of Eastern Europe; either to be absorbed along with the reformers, by the gradually penetrating external culture, or to avert this catastrophe by an inner regeneration of which Hasidism is certainly a forerunner." -- The Revival of Israel: Rome and Jerusalem, pg. 246-248

We'll have to thank Michael Hoffman for that insight. The quote from Moses Hess was provided in Hoffman's book, Judaism Discovered.

There's no telling how many years of wasted energy, sifting through the excrement, his research has saved me.

And thanks for your efforts on this blog. There are hardly any sources of information available that actually have a handle on the essence of Judaism.