"[Pope Francis] cares for me, and controls everything regarding my food to makes sure it is all kosher, and according to my religious tradition" (Rabbi Abraham Skorka) 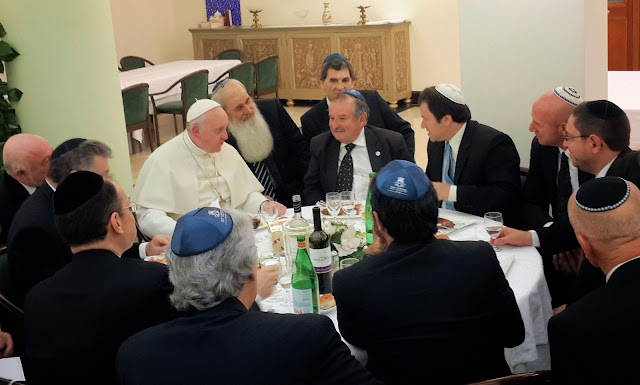 [Rabbi Menachem] Margolin [head of both the European Jewish Association and the Rabbinical Conference of Europe] cited support by members of the Catholic clergy and the government ombudsman for legalization as the fruits of his organization’s lobbying... ("Jewish ritual slaughter to commence as Polish high court overturns ban," Sam Sokol, Jerusalem Post, Dec. 10, 2014)

Fellay would agree with your headline. After all, he has publicly said that "the Jews are our (SSPX Traditionalists') Elder Brothers".

Another great post Maurice! You have been doing an exceptional job of late.
CMJ

Would you be surprised if it was them who organized Lefebvre - whether he knew it or not - to eventually drive the Catholic Traditionalist movement into the pit? People like Hutton Gibson suspected that this was his intention but did not speculate if he had any puppet masters.

The real goal of Hitler and his Third Reich was to destroy Catholicism, not Judaism. World Jewry came out of WW2 as strong and powerful as ever, which is saying a lot, while the Catholic Church was greatly diminished after WW2.

The usurpation of The Church in October 1958 was in great part due to destruction the Fascists/Nazis heaped on The Church during WW2. Mussolini's mistress of 20 years was the Jewess Margherita Sarfatti. The Sarfattis were a wealthy Jewish Venetian family who made their fortune in the Jews "Golden Circle" slave trade. Jews bank-rolled Italian Fascism as they bank-rolled Nazi Germany.

The "Pope" cries his crocodile tears about Nazism, but it was Nazism that greatly weakened the Catholic Church which led to the Oct. 1958 usurpation of The Church, which lead to Francis being installed as Pope. He greatly exaggerates the suffering of the Jews during WW2 to cover up the fact Nazism/Fascism was really about destroying Catholicism as a cultural/political force.

No recognition that Italian Catholics saved a lot of Jews during WW2 when the Nazis invaded Italy. NO Truth from this "pope", none at all. The "pope" might as well be a donmeh Jew [ he loves Islam so much as Hitler was a donmeh Jew and loved Islam]. I wouldn't be surprised to find out some day Francis is really a donmeh Jew.

From a sermon by Fr Louis Campbell

According to Francis Bergoglio, everyone is going to Heaven. You can
believe anything or nothing. The fantasy world of Francis includes all
religions, but especially the Jewish religion. He has a long history of praying
with the Jews, and taking part in their religious ceremonies (which is absolutely
forbidden by the Catholic Church). One of his best friends is Rabbi Abraham
Skorka from Argentina, whom he entertains at the Vatican.

But Rabbi Skorka, and those
who are known as Jews today, are not of the same religion as the believing Jews
of the time of Christ. They are Talmudic Jews. Their “holy book” is the Talmud,
which was compiled only after the time of Our Lord. The Talmud says that Jesus
Christ is in Hell being boiled for all eternity in a cauldron of human waste.
The Talmud also horribly blasphemes the Most Holy Mother of God, Mary,
portraying her as a woman of loose morals. Christians, it says, are not
descended from Adam and Eve. They are non-human. Everything they have is really
the property of the Jews, who may appropriate it by any means foul or fair. The
Jews have devised what they call the Noahide Laws for non-Jews, since they
claim exclusive right to the Ten Commandments. According to their Noahide Laws
those who believe Jesus Christ is God are destined to be executed.
Anonymous said...

These are the “friends” of
Francis who, following the lead of the previous conciliar popes, has led what
was once the Holy Catholic Church into apostasy. It has become a Judaic sect,
of which Francis is the Chief Rabbi.