Pharisee Pope Francis teaches for doctrine the contrivances of the rabbis 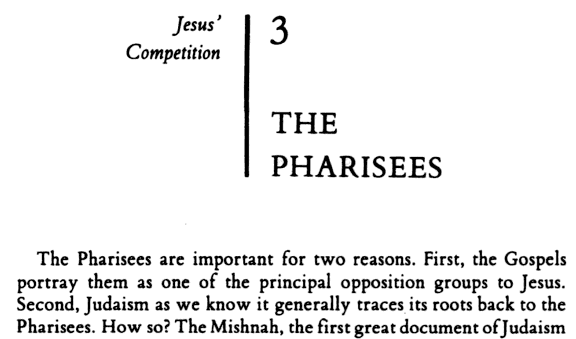 Francis has delivered another sermon in which he chastises the common Catholic who is dismayed by radical changes in religion as "rigid" "Pharisees" (Pope Francis: Rigidity is a sign of a weak heart). This is an inversion of the Gospel of the Jesus Christ who chastised the Pharisees for their changes to God-ordained teaching which they replaced with their own made-up traditions, laws and doctrines ("teaching for doctrine the commandments of men").

But Francis really tips his anti-Christ hand when he follows up this shaming with a notion utterly alien to Christianity but germane to the hasidic ghetto:

“Even our life can become like that [ie Pharisaic], even our life. And sometimes, I confess something to you, when I have seen a Christian, a Christian of that kind, with a weak heart, not firm, not fixed on the rock—Jesus – and with such rigidness on the outside, I ask the Lord: ‘But Lord, throw a banana peel in front of them, so that they will take a good fall, and feel shame that they are sinners, and so encounter You, [and realize] that You are the Saviour. Many times a sin will make us feel shame, and make us encounter the Lord, Who pardons us, as the sick who were there and went to the Lord for healing.”


Here is Francis essentially saying that he hopes that the people who don't like radical 'Noahide' Novus Ordo changes will fall into sin and thereby "encounter the Lord." This notion is entirely foreign to Christianity, but to Hasidic Judaism it is of the essence:

Francis is teaching the essence of Hasidic Judaism and one of the root causes for the extreme depravity witnessed in every Hasidic community: that one must sin in order 'to come closer to God.'

Now, what's interesting about Pope Francis raising the example of Pope Pius XII in this context is that much of the groundwork for the 'Noahide' Novus Ordo revolution was laid during his pontificate. It was at this time that changes to the liturgy began with the alteration with the much hated (by the rabbis) Holy Week liturgy. It must also be noted that Pope Pius XII's confessor was Augustine Bea, who we have noted made it a personal project to get the rabbinic midrash the Poem of the Man God into circulation. Throughout The Poem ( a work which outrageously depicts Jesus Christ venerating the Pharisee Hillel) is the notion that "we sinners are more yielding to good" and that one should be "a big sinner" in order to repent.

But most telling of all is Francis' pharisaic rigidity with which he proclaims that it is "incomprehensible" that anyone would question "The Holocaust" unless they were insane. Here is rigid pharisaism par excellence.
Posted by Maurice Pinay at 12:47 PM

"As above so below" Albert Pike's
Freemason doctrine seems
appropriate to be parallel to "Pope" Francis and the Pharisees doctrine. Depends upon which GOD/god "Pope" Francis is making reference Satan or Jesus. I for one am a Hard Shell Moss Backed Catholic and met Jesus at my Baptism. Jesus the real Jesus said that many shall come in His name and not to follow after them I think that is the case with "Pope" Francis and his baloney.

Maurice Pinay: The news just released that President Barack Obama restored relations with communist Cuba! This facilitated the release of Alan Gros from a Cuban jail! Adulation from the media (Wolf Blister and the like)this comes conveniently at the beginning of Chanukah and the Vatican was the intermediary. So too break this down... "Pope" Francis communist Jew mediated with Morrano communist Jew Fidel Castro with Barack Obama Marxist Leninist to undercut United States foreign policy to release from the Cuban jail Alan Gros Jew. The State Dept.John Kerry Jew also thinks this is all warm and fuzzy. The next release will be Pollard Jew spy for Israel. "Pope" Francis is the same as Anti-Pope Anachlet (Jew) and all the V2 "Popes" since Anti-Pope John 23(Rosicrucian Jew)Question, is the Anti-Christ now on Stage?

and not unlike our Saviour and God we carry our cross daily under his Pontificate and our leader Obama ,who made up special point yesterday during his special address to the nation, of thanking Borgoglio for his influence with Castro in opening up Cuban /American relations for Free Trade!
Anyone read the Jesuits?
The elder Castro supplied the Marxist communist curricula from the soviets for the Jebbie school children in S America.
One of the first things Pope Francis did was to make peace with Liberation Theology as an aberration of the past.

I like the new look of your blog and the way you are using more text and references within your blog post, rather than mainly links to other URLs online.

As for your content, you are commendably demonstrating what I tried to show in "Judaism Discovered": that Orthodox Judaism is a completely alien pagan religion bereft of any resonance with the prophets and law-givers of the Old Testament.

The rabbinic doctrine of "descend to ascend" is what Satan whispers in the ear of all who seek an alibi for defying the law of God. Yet Judaism has a reputation in the media and worldly culture as being strict observers of God’s law.

Pope Francis is a crypto-rabbi, using the Kabbalistic pillar of mercy (chesed) on liberal Catholics and Judaics etc., and the pillar of severity (gevurah) on those Catholics attempting to be faithful to the Church of All Time. The media focus entirely on his chesed and ignore his gevurah. This is an ancient magical charade.

I’m tough on all popes after usury entered the Church in 1515, but one must acknowledge certain virtues that somehow were present in some pontificates post-1515. It bears repeating that Pope Pius XII refused to say that Judaics were executed in gas chambers; that was a titanic act of defiance on his part.

Rabbi Jorge the gift that keeps on giving

The false Jewish Messiah which will have traits of Christ (as Benedict XVI tells us)
must not be far off.

We have the false prophet melding the façade of Catholicsm with the Religion of
'dead mens bones' all in readiness.

Oh how cleaver the slimy creature from hell is. I am so glad Our Lord won this victory on the Cross, otherwise we could fall into despair, as clever as the slime is, he will never outdo Our Lord or his faithful ones! Soldier on. And thank you
for keeping us informed!