Paris, yesterday, in the most colossal farce of world history, you marched for 'freedom' behind Benjamin Netanyahu. Today you are militarily occupied. Judeomasonic 'Liberté' has rendered you a 'Jewish' ghetto, soon to be a heap of rubble if you continue to play into the stage-managed revolution. Netanyahu wants 'the Jews' out of France so that the 'clash of civilizations' can be fully unleashed on your land. If you don't understand this, you haven't learned anything from Afghanistan, Iraq, Egypt, Libya, Syria, Ukraine, et al. Formerly Catholic France is hated more than any of these smoldering nations by the rabbis and bankers behind the revolutions.

Don't think for a second that marching for the 'freedom' to publish cartoons of the Trinity sodomizing itself and mocking Muhammed will satiate these intolerant Talmudic fundamentalist crazies. It will not. Contrary to 'truth seeker' misinformation, Islam is vastly preferable to the rabbis than Christianity, which is not to say that I believe there is any Christianity in France; only that the rabbis want to destroy even the remaining empty shell of Christendom throughout Europe and they intend for Islam to be their scourge.

To traditionalist readers, radical Islam is not a chastisement from God, that is, unless the rabbis and bankers are your god. 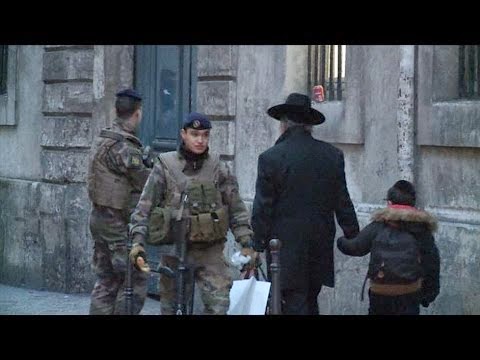 … After reveling Sunday in the unity of millions marching in the streets ... the nation awoke Monday to the sight of 10,000 troops fanning out to guard “sensitive sites,” including synagogues, railways stations, airports and tourist attractions. Nearly half the soldiers — about 4,700 — will be assigned to protect France’s 717 Jewish schools, officials said …

“It’s an indication of the level of menace we face,” said Col. Benoit Brulen, who stood guard with three rifle-toting soldiers at the Jewish school and synagogue in the city’s 11th arrondissement — not far from the offices of a satirical newspaper where the bloodshed began last week.

The troops’ presence, Brulen said, would continue “as long as the threat exists.”

The deployment foreshadows what are likely to be contentious debates here over how much France is willing to sacrifice its freedom, civil liberties and famously laissez faire way of life to preserve security...

“There are going to be some very serious discussions about how to deal with this threat, and unfortunately that equates with some kind of militarization,” said Myriam Benraad, a terrorism researcher at the Paris-based Sciences Po university.

Already on Monday, French officials were hinting at the changes to come. French Prime Minister Manuel Valls told television network BFM that the government would push for legislation to expand intelligence agencies’ access to wiretaps, a move similar to one being pursued in other European capitals, including London…

The major security buildup around Jewish sites comes after Israeli leaders urged European Jews — and, in particular, those in France — to move to Israel …

“I wish to tell to all French and European Jews — Israel is your home,” Prime Minister Benjamin Netanyahu said Sunday …

Judeofascism lays siege to France beneath a smokescreen of Islamic terror

Christians are being culturally and physically exterminated from Middle East as direct consequence of Judaic conquest
Posted by Maurice Pinay at 7:52 PM

Right across the globe from Ankara to Beijing people are swallowing this load of bollox!

Population of Palestinians in Israel
is out-gaining Jewish population.
Netanyahu's feigned concern for the Jews wishing they would migrate to Israel is for the purpose of "Greater Israel" not for any human concern.

An ewtn priest says the Israeli birthrate is .94 whilst the Palestinian birthrate is 5.4(?, close). He says bearing children is faith and also hope in the future and Israelis(Jews) have no faith.
Whether Palestinians and the Muslim world have faith and have hope in the future or if they merely are not "modern" is a question. But there's very little question as to Jews having no faith.

I would not conflate faith with hope for the future. These can and do often go hand in hand but they are not necessary the same.

Hasidic families average 8 children, so the hasidic ghetto is the future of 'the Jews' and Counterfeit Israel. This says nothing of faith to me but they apparently do hope that their crime syndicate religion will continue to sustain them.