This token gesture of 'justice' is only happening because in this most recent Orthodox Judaic attack on a Catholic church, there was substantial international reporting which called attention to the religious motive of the Judaic terrorists. Independent Catholic news orgs in the U.S. finally did some adequate reporting on this latest church attack and drew attention to the Orthodox Judaic motive.

No one reading the report below should be lead to believe that 'Israel' has any concern for Christian or Palestinian rights or welfare. It only means that 'Israel' is extremely sensitive to its image abroad. If that is the only means of assuring that non-Judaic people can have even a semblance of security in this region, then we must keep up the honest reporting. 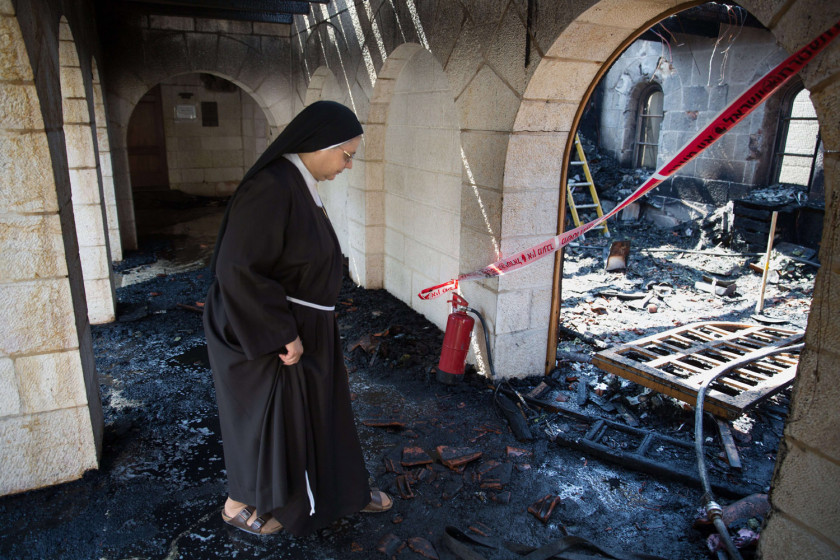 The Church of the Multiplication on the Sea of Galilee was burned by Orthodox 'Jews' who also spray painted the church with hate graffiti from the Aleinu prayer which every Orthodox 'Jew' prays three times every day, June 18, 2015. The Judaic attackers likely chose the 18th because 18 has strong cabalistic significance, meaning 'life' (Chai: Judaic life, that is). In Orthodox Judaism, Judaic 'life' is strengthened when non-Judaic life is weakened

JERUSALEM (JTA) — The two men indicted in the alleged arson attack on a historic church in northern Israel has previously been involved in attacks on churches and Palestinians.

The two suspects, ages 19 and 20, were indicted Wednesday on Nazareth Magistrate’s Court in connection with the June 18 attack on the Church of the Multiplication of the Loaves and Fishes.

“Administrative steps” will be taken against three other suspects who were not indicted, Israel’s Shin Bet security agency said in a statement issued Wednesday.

The group, which has “an extremist ideology,” has operated since 2013, according to the Shin Bet, and “aspires to change the regime and bring about the redemption via various stages of action.”

Some of the activists have been involved with the settler hilltop youth in the West Bank as well.

The group began with anti-Christian activity, including vandalizing and arsoning Christian sites, and also tried unsuccessfully to disrupt the May 2014 visit to Israel and the West Bank of Pope Benedict XVI. In the last year it also perpetrated arson attacks on Palestinian homes, according to the Shin Bet.

“The Israel Security Agency and the Israel Police view with utmost gravity any intent or action to attack religious sites in the State of Israel and will work together in order to foil the activity,” the statement said.

Police initially detained 16 youths in the attack on the historic Church of the Multiplication of the Loaves and Fishes, who were hiking in the area on the evening before the attack.

Along with the fire that struck the church, located on the northwest shore of the Sea of Galilee, graffiti reading “False idols will be smashed” and “pagans” were found on its walls. The site is where Jesus is believed to have fed thousands of people with five loaves of bread and two fish.

Built on the site of a fifth-century church, the church contains restored mosaic floors from the time period. The fire reportedly damaged the church’s roof and structure and burned hundreds of books, according to Haaretz.

Posted by Maurice Pinay at 9:48 AM

Another motive for the Israelis to act is Christian tourist dollars.