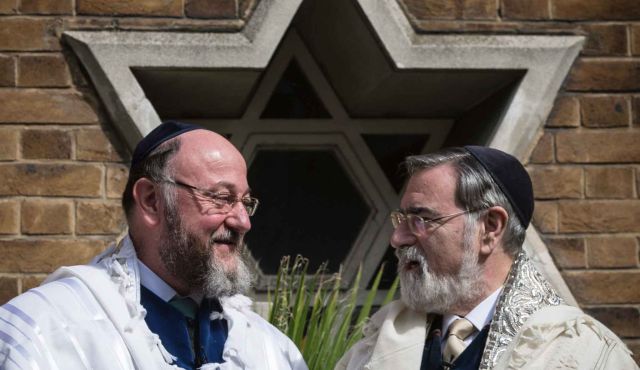 Like his predecessor Rabbi Jonathan Sacks (on right), current Chief Rabbi of Great Britain, Ephraim Mirvis is Chabad on the inside HERE

The section of the Vatican II document Nostra Aetate pertaining to 'Jews' is a collaborative work between three Judaic subversive 'convert' priests HERE, two rabbis HERE, and a few nominally Catholic crypto-rabbis e.g. Cardinal Augustine Bea. Nevertheless, the document doesn't say what it's commonly claimed to say, that 'it absolves Jews for the crucifixion of Christ.' In fact, it blames Judaic leaders, like Chief Rabbi of Britain, Ephraim Mirvis, for calling for the crucifixion of Christ, which they certainly did, inciting the Jewish people to do the same. And indeed, Rabbi Ephraim's religion, Orthodox Judaism, takes full responsibility for the execution of Christ in its most sacred texts, which is why I confidently, unreservedly identify Orthodox Judaism as a Deicide religion HERE and you should too.

Orthodox Judaism is also a religion which calls for the destruction of Christian churches in its most sacred texts. And after pious 'Jews' burned the Church of the Multiplication in June and spray painted a passage from the Aleinu prayer on the church wall, a highly respected rabbi of Orthodox Judaism, Rabbi Bentzi Gopstein, upheld the orthodoxy of this terrorist act by citing the teachings of the codifier of Orthodox Judaism, Moses Maimonides mandating that 'idolatrous' Christian churches should be destroyed HERE.

So there is a bit of context for the upcoming meeting between two rabbis of Deicide Judaism this Thursday at the Vatican, one of which wears a pope suit.

Chief Rabbi Ephraim Mirvis is to have a private audience with Pope Francis in the Vatican on Thursday – his first meeting with the head of the Catholic Church.

He will be accompanied by Cardinal Vincent Nichols, the Archbishop of Westminster, on the visit, which has been scheduled ahead of next month’s 50th anniversary of the groundbreaking declaration on Jewish-Christian relations, Nostra Aetate.

Rabbi Mirvis said that “today we face challenges that could not have been accounted for by Nostra Aetate 50 years ago, such as the widespread secularisation of our society and the dramatic increase in prejudice against minority faith communities.”

He added that “We treasure the spirit of collaboration between our faiths and I look forward to discussing these and other pressing issues with Pope Francis.”

Nostra Aetate marked a sea-change in relations between Judaism and Christianity, reversing centuries of officially sanctioned antisemitism and absolving the Jews of collectively being responsible for the death of Jesus.

Bronfman, in remarks to reporters during the dinner, said that the issue of Jerusalem should not prevent the Vatican from recognizing Israel. “If there are problems that the Vatican may have over Jerusalem, somebody ought to hear about them, “Bronfman said. “These things should be opened for discussion.”

The award to O’Connor commemorated the 20th anniversary of Nostra Aetate, the Second Vatican Council declaration that deplored anti-Semitism and deicide charges. According to Bronfman, while Nostra Aetate was a landmark in Christian-Jewish relations, there remains much work ahead toward bettering relations between the two people.

“Theres a lot more to be done, including Vatican recognition of the State of Israel,” he said. “To stop at a point that was reached 20 years ago with Nostra Aetate, and that’s it, is a great mistake.”

“REMARKABLE PROGRESS” BY CHURCH NOTED
Nathan Perlmutter, national director of the ADL, praised the success of Nostra Aetate and the “remarkable progress” by the Catholic Church in its teachings about Jews. “To belittle the progress made in 20 years following 2,000 years of teaching of contempt is to overlook the efforts the Church has made to clean its liturgy in its teachings of the Jews.”