On Rosh Hashanah (Talmudic New Year), the Shofar (ram's horn) is blown to confuse Satan and God so "the Jews" may escape accountability for their sins 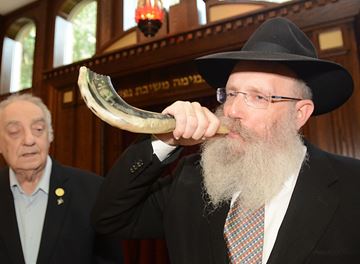 A Chabad rabbi blows a shofar in Canada

The following is excerpted from Rabbi Israel Drazin's book, Maimonides: The Exceptional Mind. Rabbi Drazin is a member of the Rabbinical Council of America, Rabbi Joseph Soloveitchik's Council of Orthodox rabbis. Rabbi Drazin is also a follower of the dead Messiah of Lubavitch, Menachem Schneerson. We highlighted Rabbi Drazin's account of 'modern on the outside and Chabad on the inside' proselytization of U.S. 'Goy' military men to follow 'the Noahide Laws' as he was instructed to do by Rebbe Schneerson HERE. Rabbi Drazin is a Brigadier General in the U.S. Army, something which military coup enthusiasts should bear in mind as there are many others like him.

The Shofar Scares and Confuses Satan, Keeping Him at Arm’s Length

It is absolutely certain that both the spiritual leaders of Jewry and the masses of uneducated Jews (or at least the majority of these) before, during and after the talmudic period believed that the shofar, the ram’s horn, was blown on the holiday of Rosh Hashanah in order to confuse Satan and his demonic cohorts. The widely held belief was that the blowing of the shofar would stop Satan from approaching God at a crucial moment, keeping him from indicting Jews for past sins in a heavenly judicial proceeding in which God decides the future of each Jew ...

Why is the Day Called Rosh Hashanah?

The Bible does not indicate a date when the year begins. The Talmud records two opinions on the subject. One position is that it is the first day of the month of spring, the first month Nissan, the same month in which the holiday of Passover occurs. This is the month that the Torah calls the “first of the months” because it recalls the Exodus from Egypt. The second idea, which became the accepted view, is that the year begins on the first day of the fall, in the seventh month Tishrei. More specifically, this opinion states that the sixth day of creation, the day on which humans were created, was the first day of Tishrei, and that the new year begins with this sixth day of creation. Once this non-biblical idea – that the first of Tishrei is the beginning of the new year – was accepted by Jews, Yom Teruah gained the name Rosh Hashanah, “New Year,” in the popular mind, although it retains its biblical name Yom Teruah in the holiday prayer book.

The Ancient Use of the Shofar

Anthropologists and other social scientists have recognized that ancient people used a shocking sound like the shofar blast to attract or repel. Sir James G. Frazer (1854–1941), in his Golden Bough, in the chapter on “The Scapegoat,” states that primitive people usually sounded loud noises on New Year’s Day to expel demons; today’s noisemaking on New Year’s Day is a relic of this ancient practice. It seems likely that this was also the original purpose for the shofar blasts; surprisingly, this is the view of the Talmud.

The Talmud Relates the Shofar-Blowing to Satan

The original reason for blowing the shofar on the New Year, to frighten and expel satanic forces that may persuade an influencible God that the Jew is a sinner and should be punished and perhaps even killed during the upcoming year, is explicitly reported in the Babylonian Talmud, Rosh Hashanah 16b. The Talmud states that the shofar is blown “to confound Satan” and to prevent him from approaching God and accusing Jewish people of past sins.

Long after the practice of shofar blowing began, the Talmud mentions that there are two series of synagogue shofar blowings, one during the Amidah – or standing – prayer and one before it. One of these series – the rabbis differ as to which one – is an integral part of the way that Rosh Hashanah came to be understood, while the other, the more ancient practice, the Talmud says, is designed to confuse Satan.

One series reflects a more advanced spiritual concept of the shofar. The other retains the ancient primitive superstitious fear of demons and the notion that Satan is involved in divine judgments and has the power to influence God’s decision about the future of a Jew’s life and that humans, in turn, have the somewhat supernatural ability to confuse Satan, a heavenly being, and restrain him from carrying out his diabolical scheme to harm Jews.

The Superstitious Origin Recognized in Many Sources

This notion is present not only in the Talmud but also in various legal codes and commentaries, such as Nathan ben Jechiel’s Arukh (1035–1106) and David Abudarham’s book on prayer Perush haberakhot v’hatefilot (fourteenth century).

The shofar is blown one hundred times on Rosh Hashanahas a significant part of this holiday’s service. Yet the Torah [i.e. The Bible] does not mention that the shofar should be sounded on this day ...


Source: HERE and HERE
Posted by Maurice Pinay at 5:02 PM

"... The rabbi constituted the projection of the divine on earth. Honor was due him more than to the scroll of the Torah, for through his learning and logic he might alter the very content of Mosaic revelation. He was Torah, not merely because he lived by it, but because at his best he constituted as compelling an embodiment of the heavenly model as did a Torah scroll itself." [Rabbi Jacob Neusner, "The Phenomenon of the Rabbi in Late Antiquity: II The Ritual of 'Being a Rabbi' in Later Sasanian Babylonia," Numen, Vol.17, Fasc. 1., Feb., 1970, pp.3-4]

"God smiled and said: 'My sons have defeated Me, My sons have defeated Me!' God's sons ‘defeated him' with their arguments. Rabbi Yehoshua was correct in his contention that a view confirmed by majority vote must be accepted, even where God Himself holds the opposite view." (Babylonian Talmud, Tractate Bava Metzia 59b, Steinsaltz Edition [NY: Random House 1990], Vol. III p.237)

“The [Pharisaic-Rabbinic] schools believed that in heaven God and the angels studied Torah [i.e., Talmud/Kabbalah] just as the rabbis did on earth. God donned phylacteries like a rabbi. He prayed in rabbinic mode ... He guided the affairs of the world according to the rules of the Torah, like the rabbi in his court. One exegesis of the Creation-legend taught that God had looked into the Torah and therefrom had created the world. Moreover, heaven was aware above of what the rabbis in particular thought, said, and did below. The myth of the Torah was multi-dimensional. It included the striking detail that whenever the most recent rabbi was destined to discover through proper exegesis of the tradition was as much of a part of the way revealed to Moses as was a sentence of Scripture itself. It was therefore possible to participate in the giving of the law, as it were, by appropriate, logical inquiry into the law. God himself, studying and living by Torah, was believed to subject himself to these same rules of logical inquiry, so if an earthly court overruled the testimony, delivered through some natural miracles, of the heavenly one, God would rejoice, crying out, ‘My sons have conquered me! My sons have conquered me!’ [Rabbi Jacob Neusner, "The Phenomenon of the Rabbi in Late Antiquity: II The Ritual of 'Being a Rabbi' in Later Sasanian Babylonia," Numen, Vol.17, Fasc. 1., Feb., 1970, pp.3-4]

These are now Satan's chosen people.