Pope Francis to arrive in U.S. as his brothers in the faith make a Yom Kippur eve deal with Satan 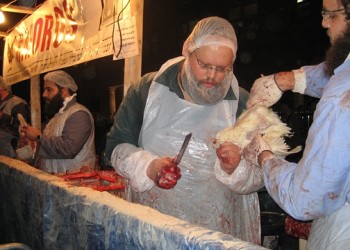 Chickens are ritually slaughtered in Brooklyn on Oct. 8, 2008 during the kapparot ritual.


We recently documented that the Orthodox Judaic meaning of the tradition of blowing of the shofar on Rosh Hashanah is to confuse Satan and God so 'the Jews' may escape accountability for their sins HERE. This is only the beginning of the 'High Holy Days' of rabbinic Judaism and it's dealings with Satan, however. On the eve of Yom Kippur, a traditional ceremony of Judaism called kapparot serves as an occasion to bribe Satan with a sacrificial offering of a chicken. Pope Francis, whose deep respect for the rabbis and their traditions is a well established matter of record, will arrive in Washington D.C. as this satanic ritual is performed in Judaic ghettos throughout the U.S.

We should preface this by clarifying a matter of great confusion and disinformation related to the religion of Orthodox Judaism. The 'Goyim' are often told that 'Satan doesn't exist in Judaism,' or somewhat closer to the truth, that 'Satan has a different meaning and unimportant role in Judaism.' The truth is that Satan most definitely does exist in Judaism, and very prominently, as we see in the lead role he plays during the 'High Holy Days.' A clear understanding of the meaning of Satan in Judaism is sorely lacking among outsiders but is key to understanding Judaism and the mentality it engenders and which endures even among today's 'non-observant Jews.'

Drawing upon their understanding of the Job story, many Jews thought that one of Satan’s functions was to serve as a prosecutor in the heavenly court against their interests. (Drazin, Israel, Maimonides: The Exceptional Mind (Kindle Locations 3164-3165). Gefen Publishing House. Kindle Edition)


So we see that, essentially, in Judaism, Satan is the arch 'antisemite.' Judaism, a legalistic religion, takes a courtroom view of metaphysics making Satan to be an 'antisemitic' court prosecutor. Readers of Michael Hoffman's Judaism Discovered are aware that for 'Jews,' in the court system, 'antisemites' can be bribed to obtain 'justice' for 'Jews.' Satan is no exception:

Recognizing that [Jews] were unable to fight and defeat an angel, they resorted to bribing him. They interpreted Leviticus’ Azzazel [scapegoat] command as a mandate from God to save themselves from Satan’s accusations by bribing him. (ibid, Drazin)


With that fundamental insight into the role of Satan in Judaism we can proceed in understanding the prominent role of Satan in yet another of Judaism's 'High Holy Days,' the eve of Yom Kippur: 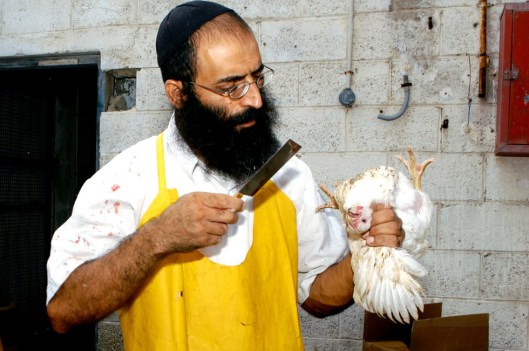 The term kapparot denotes an offering tendered in the hope of gaining forgiveness for past misdeeds. Many Jews currently practice the kapparot ceremony on the eve of Yom Kippur. A fowl is waved counterclockwise around the head of a man or woman and words are recited requesting that the person’s sins be transferred to the fowl. “This is my exchange, my substitute, my atonement. This rooster shall go to its death, but I shall go to good, long life and to peace.” The rite concludes with the slaughtering of the fowl.

... Virtually all ancient sources recognize that the practice was originally designed, just as the Jewish masses understood the biblical Yom Kippur Azzazel ceremony in Leviticus 16: 8, as a bribe to Satan to keep him from accusing Jews before God for their misdeeds during the past year. The Machzor Vitri, composed by Simcha of Vitri, France, a student of Rashi (who died in the same year as his teacher, 1105), admits that the purpose of the kapparot is exactly the same as the scapegoat sent to Azzazel; both are bribes for the devil. This was also the opinion of Yaakov Hayim Zemach in Nagid U’mitzvah, Isaiah Horowitz in Sh’lah, and J.Z. Lauterbach in HUCA 11, “Tashlich.” Lauterbach writes: “The real significance of this ceremony was that it represented a revival of the old idea of bribing Satan or demons by offering to them a sacrifice as had been done in the times of the Temple [for the Bible mandated in Leviticus 16: 8 that on Yom Kippur a goat was sent to Azzazel].”

The earliest mention of the kapparot service is in a responsa (a written answer to a question submitted in writing to a rabbi) written by Amram bar Sheshna, also known as Amram Gaon, the head of the academy of Sura, Babylonia, around 850 C.E. Amram mentions that the custom of kapparot is quite old. We can therefore safely assume that kapparot began at least a couple of centuries earlier.

AN ANCIENT VERSION OF KAPPAROT

The Babylonian Talmud, Shabbat 81b, reports a third-century practice that is remarkably similar to kapparot and shares the same superstitious basis and goal. A basket of beans or peas was taken, turned around one’s head seven times and then tossed into the water. The practice was called parpisa, similar to the English word “propitiate,” to make someone favorably inclined to one’s desires. The uneducated masses considered seven a magical number, moving in a circle a magical rite that produced a desired result, and water the dwelling place of the demons. Thus food was tossed in the water as a bribe for the demon.

THE ANCIENTS: THE YOM KIPPUR AZZAZEL CEREMONY AS A BRIBE Many rabbis shared the belief in demons held by the less sophisticated population. The mystic Bible commentator Nachmanides, Rashi and many others believed in the existence of angels and demons, both of which they viewed as corporeal and having powerful positive and negative impacts upon humans and the ability to alter their lives. God instructed Jews not to seek the assistance of these intermediaries in various biblical passages including Leviticus 17: 7. Yet, remarkably, in his commentary to Leviticus 16: 8, Nachmanides, like many others, states that God told the Israelites to bribe Satan by sending him a goat that resembles him every year on the holiday of Yom Kippur. This was the Azzazel goat. The purpose of the bribe, as stated earlier, was to stop the demon from traveling to heaven on this day, when decisions were being made concerning the future life and death of Jews, and persuading God to punish the Jews for their sins during the past year. The purpose of kapparot, according to Nachmanides and many others, was identical. Although the destruction of the Temple in 70 C.E. stopped the public ceremony of Azzazel, the bribery continued by individual Jews performing the kapparot rite.

WHAT WAS DONE TO KAPPAROT AFTER THEY WERE SLAUGHTERED?

Commenting upon the Babylonian Talmud, Hullin 95b, Asher ben Jehiel (known as Asheri, c. 1259– 1328) states that the ancient custom of kapparot was to toss the entrails of the sacrificed rooster on the roof of one’s house. Like the water, the masses were convinced that the roof was a dwelling place of demons. The practice of leaving food for Satan as a bribe was altered in ancient times to disguise its original superstitious intention. Natronai Gaon, the ninth-century head of the academy in Sura, Babylonia, reports that in his time food was no longer thrown into water or placed on roofs but was given instead to the poor. This was a somewhat subtle subterfuge since the masses were convinced that Satan frequently disguised himself as a poor man in order to test people. Thus the food was expected to end up in Satan’s hands.

[Kapparot] is still practiced by many Jews today. Those who recognize the quasi-magical aspect attempt to defend it by calling it “magic for a good purpose.” Others have stopped using an animal for the ceremony and substitute money, which is then given to the poor. Those who do so probably do not know that the ancient masses thought that Satan would disguise himself as a poor man to test the Jews. Thus, the bribe is still being given to Satan, albeit surreptitiously.

Remember that pitcher that, as he was firing the ball to the catcher a bird just happened to fly into its path and was killed. People were freaked out about that incident and demanded all sorts of things. It's amazing with all the kapparot videos on YouTube that this still goes on. Where's PETA, humane society, etc.?
No group would touch kapparot because their funding would immediately dry up.
Only a handful of Jews are allowed to protest.

Catholics are too busy fearing Isis and Iran and don't realize that the heschelites have taken over both their minds and their Church. Ahhh Rothschilds that 1829 bid for Jerusalem was pure brilliance.

The Judaics and their 'magical' k[r]apparot sicken me. Is that "anti-semitic"?
Whatever.