"My children have defeated me"
(God, according to Babylonian Talmud, Bava Mezia 59b)

Pope Francis recently offered another sign of his adherence to Orthodox Judaism with his comment that he has the audacity to rebuke Jesus and has done so throughout his life, even as Pope:

What Francis refers to here is the essential rabbinic tradition, 'audacity towards heaven' (chutzpah kelapei shemaya), meaning to rebuke, or even put God on trial.

Readers may recall previous discussion on the lawyerly, courtroom metaphysics of Judaism at the heart of Judaism's 'high holy days' HERE. I imagine that it might shock even readers who've some understanding of Judaism to find that it espouses the presumption that 'Jews' can confuse, deceive, rebuke, and even put God on trial, defeat Him in debate (Bava Mezia 59b) and thereafter have God as their humble student who needs to be redeemed by them, but so it is. And such is the megalomaniacal foundation for so much insufferable Judaic behavior owing to the rabbis who've inculcated this cosmic arrogance throughout history. If 'the Jews' can defeat God with their (allegedly) superior arguments, what match is 'the Goyim' for these above-divinity lawyers? They're simply to be ignored, or at most shoved aside.

It is a fundamental Hasidic dictum that, "It is against the Creator of the universe and the Lord of history that accusation must be hurled." HERE

From Arguing with God: A Jewish Tradition by Anson Laytner pp. 216-217 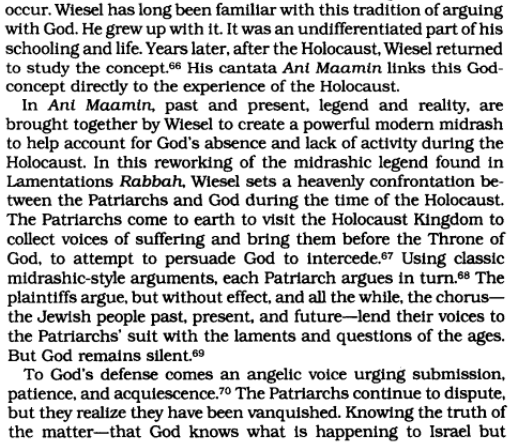 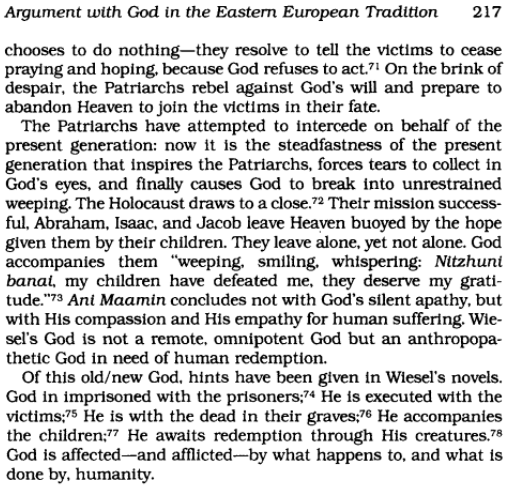 Also see: Fr. John Pawlikowski "I am close to the stage [of Hasidic Hermeticism] Elie Wiesel has reached ... Wiesel is prepared to say that human acts of justice and compassion help to liberate God"

Posted by Maurice Pinay at 7:27 PM

I wonder what they would think of St. Thomas Aquinas's Commentary on the Book of Job, in which the Angelic Doctor defends the holiness of Job against those who think he is complaining to or arguing against God.

This insanely conceited attitude toward God was institutionalized in the Roman Church via the Neoplatonic-Hermetic virus, as early as the Council of Florence and certainly by the pontificate of Alexander VI (and Leo X and Sixtus V etc.). It informed the top echelon henceforth, while a wholly different, pre-Renaissance, militant orthodox Catholicism was maintained in the rank-and-file parish priests and laity, who were still unprocessed and therefore could not be told the truth. By the 1960s the people were sufficiently processed to begin to leak the truth to them. From the time of the pontificates of Popes John Paul II, Benedict and Francis, the people were (and are) very much a product of The Process, and they can be told anything, and their reaction in general, is a shrug of the shoulders.

Talmudic Judaism = self-worship, with situation ethics making any innovation possible, if attended by the necessary beguiling rhetoric. Hence, Rome's lifting of the ban on profits on loans (“usury” — lifted by pastoral increments; not an official proclamation), and Pope John-Paul's revolutionary subversion of the Gospel teaching on Jews and Judaism, endorsed and expanded by his successors.

These are Renaissance seeds which came to fruition “nostra aetate."

Something that goes unmentioned consistently is Pius XII violating Council of Trent Canon 13 Session 7.
According to this citation,
Anyone who dares to change liturgy,Sacraments,Holy Mass,etc..is damned.
Pius XII went on a destructive rampage from 1945-1958 changing Holy Week,the Psalter,Holy Communion fast,the Holy Sacrifice of the Mass (1958),and other concessions to Germans and Chinese.
He was definitely the first of the new novus ordo Popes.
These changes made sacred tradition seem unimportant and not special.Once the sacred is rendered meaningless,destroying sacred belief is very easy to accomplish.(Catholics accepting and obeying the 'new' belief that Jews don't Jesus Christ is proof)

Mr. Hoffman is wrong on Usury as Vix Pervenit remains Catholic Doctrine. The Doctrine has not changed and so Mr. Hoffamn, who claims doctrine has changed, now is constrained to cite sacramental discipline which has changed

Not exactly the great Slydini is Mr. Hoffman

What has changed over the years (changes I don't support) is pastoral mercy has been extended first to usurers, and now, Adulterers

Mr. Hoffman is wrong on Nostra Aetate vis a vis the Jews for it changed not one thing.

Jesus is head of His Catholic Church and we have the words of Jesus promising the Holy See will never teach error and so either Jesus is a liar or Mr. Hoffman is in error.

O, and what religion is Mr. Hoffmann a member of?

Tha boilerplate language was typical of the times (Same language accompanied the then promulgation of The Psalter) but one Pope can not bind a future Pope over matters of Sacramental Discipline for he has no such authority/power.

That is an opinion and all of our disagreements will be settled once we have a Catholic Pope in Rome.

So,the Council of Trent was just huffing & puffing,blowing hot air,and the decrees had no merit or meaning?!?!?
Until Pius XII circa 1951,no Pope truly turned everything upside down until his destructive 7 year rampage culminating in allowing vernacular in German/Austrian and Chinese churches in 1958.